In May 1588, Phillip II of Spain sent an ‘invincible’ armada on a mission to conquer England, dethrone Elizabeth I, and reinstate the Catholic religion in that country. The voyage that followed involved severe storms, battles, injuries, and sickness until finally, in August 1588, a decision was made by the Duke of Medina Sidonia, commander of the fleet, to return to Spain via a route that would take him and his ships around the coast of Scotland and sail well out into the Atlantic so as to avoid Ireland. At this point the fleet had been at sea for nearly five months.

Tragically, due to raging storms and the notoriously inaccurate nautical maps of the 16th century, many of the original 130 ships foundered on the Irish coast. This is the story of one of the most unlucky ship captain’s in the whole of the Armada story.

On the 28th/29th September 1588, the Andalusian hulk La Duquesa Santa Ana was shipwrecked off Loughros Mor Peninsula. All nine hundred sailors, soldiers and crew (which included some of Spain’s nobility) on board managed to scramble safely ashore under the captaincy of Alonso de Leyva, second-in-command of the entire Armada fleet. It appears that the ship was successfully beached in or near Tramore strand, Rosbeg on the 29th September. The survivors spent nine days in the area; one camp of ordinary soldiers and seamen encamped at the ship’s side and a second at the island castle of Kiltoorish, where the young noblemen and senior officers were stationed. We can only imagine that 900 foreigners camped around the Rosbeg area must have looked like a small town had popped up from nowhere overnight, which must have confounded the local community of Rosbeg. A similar situation had developed in Killybegs, where the crews of La Girona and two other ships wrecked in the harbour had taken shelter and were given assistance by McSweeny Banagh, the local chieftain whose castle was located at the head of McSwyne’s Bay.

Back in Kiltoorish, and with the assistance and welcome of another of the McSweeny family (McSweeny Na Doe), Alonso de Leyva’s plan was to escape the current ordeal of his second shipwreck (the first being the La Rata Santa Maria Encoronada in Blacksod Bay, Mayo on 15 or 16th September). When news came that La Girona had been forced into Killybegs to undertake repairs as a consequence of the storms that raged off the Irish coast in the autumn of 1588, de Leyva prepared his plan to save his men. Preparations were made to make a one day march to Killybegs and ‘a hoped for escape back to Spain’.

On the 8th or 9th of October La Duquesa Santa Ana survivors, accompanied by McSweeny Na Doe, broke camp and traversed difficult terrain, including negotiating a tricky mountain pass. The first sight of La Girona, which had been lying at anchor in McSwyne’s Bay since the 15th of September, must have lifted the spirits of the men under de Leyva’s leadership. It promised them the hope of seeing home and families. But as they got closer they may have been dismayed when they saw the numbers of Spanish already camped in Killybegs – there was no way everyone would fit on the La Girona.

Notwithstanding, de Leyva took control, and, once La Girona was repaired, set sail for Spain via Scotland with some 1,300 on board a ship that had the capacity for about half that number. There is evidence that up to 240 foreigners were left behind in the Killybegs area. Where did they go?

Heartbreakingly, La Girona sunk off Lacada Point, Co. Antrim with the loss over one thousand lives. It is reported that there were only between five and nine survivors.

During our 2018 Spanish Armada walk we laid specially commissioned stone memorials to mark this story of human tragedy. One is set into the ground on the pier at Rosbeg, and a similar one rests in Killybegs.
Info courtesy of  the Irelandxo website
The memorial is located down below St. Catherine's Well that I posted the other day. 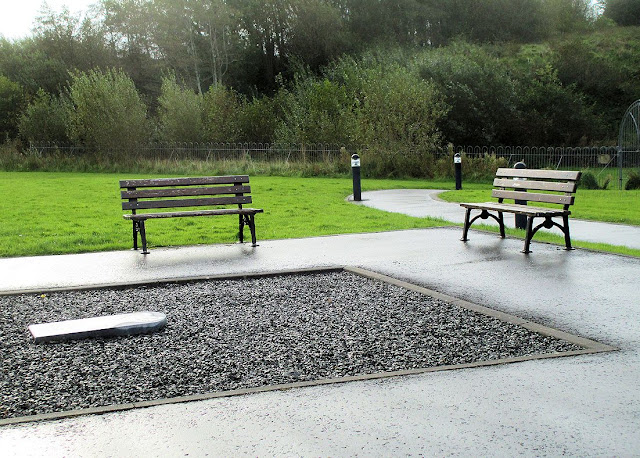 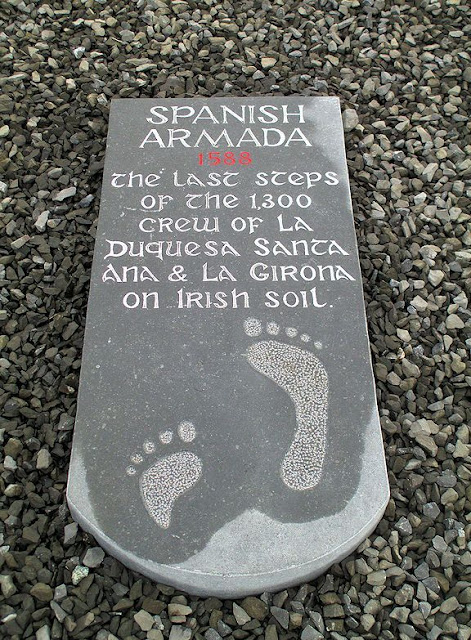